The world moves fast, and you need a high-speed internet connection to keep up with its pace, right? There are so many devices in the market that offer different degrees of internet speed and data. But ASUS has distinguished itself as one of the best router manufacturers in the market.

The ASUS RT-ACRH13 is one of their best routers as it comes with some top-notch features. They officially released it in 2016, and to date, it continues to satisfy its users. The best thing about it is that it works as well as it looks. The design is stylish and blends in with the surroundings, so people love it.

Here, we will give you all the reasons you should consider this product if you are in the market for a new router. Keep reading to learn more about this product. 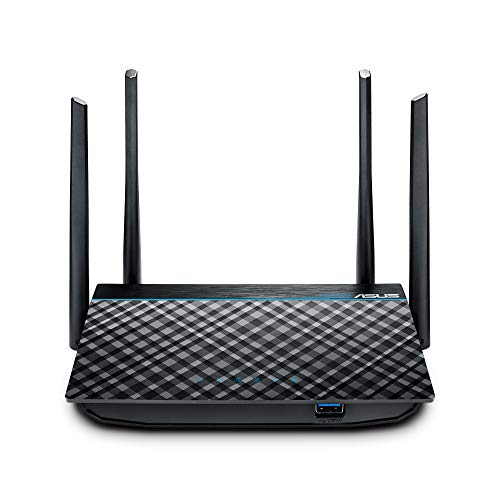 The ASUS RT-ACRH13 is a great router for modern users who want better signal strength. The router comes with so many cool features that it is hard to resist. Here are the main features it offers.

This router comes with MU-MIMO technology, which lets users access a high-speed internet connection. MU-MIMO technology refers to multi-user, multiple-input, and multiple-output technology. It lets multiple devices connect with the router at the same time while ensuring a smooth wireless internet connection. It helps increase the amount of traffic to your devices despite their number. The MU-MIMO technology in this model is more than enough for residential use. It helps decrease the amount of buffering while surfing the internet. This makes it a better router for people who do not have time to waste on lag.

The ASUS RT-ACRH13 comes with an excellent wireless connection. In addition to this, there are highly reliable wired connections for other devices, as well. This is possible due to the four ports, each of which supports a Gigabit format. The availability of four Ethernet ports makes it even more efficient for gamers. These are great, as they help you connect all of your gaming consoles for a reliable connection.

Another distinguishing feature of this model is that it has very powerful antennas. It has 5dBi antennas, which are in the league of the best antennas in the market. The fact that there are four of them makes it super-fast, and provides even distribution of signals. You can even point the antennas in the direction you want for greater signal strength.

This router has a dual bandwidth, which ensures it can adjust according to the different frequencies of data input. There is a 5 GHz band for massive internet traffic and a 2.4 GHz band for other tasks. They work together to provide an unbeatable upload and download speed for those who work from home.

This router by ASUS comes with some remarkable features which make it a must-have for internet users. Here are some of the pros you can enjoy if you choose to buy it.

The router is best suited for people of this era because of its speed. The 5 GHz band offers a speed of 867 Mbps, and the 2.4 GHz one delivers the speed of 400 Mbps. The combined speed of the two bands is 1267 Mbps, which is quite high compared to other routers. This enables you to download and upload content from multiple devices at the same time.

One of the major perks of buying this model is the signal strength it comes with. It has four 5dBi antennas that cover the maximum possible area in your place. These antennas stand on every corner of the router and ensure an equal spread of the signal. You also get to enjoy a greater speed with these, as they have powerful range coverage. There is hardly ever any drop in signal or speed, even when using multiple devices. This makes it an ideal router for medium to large-sized houses where the internet is an issue.

More often than not, internet users complain of restricted compatibility of their routers. The routers either support iOS devices or Android and Windows. This one beats them in this regard, as it has very high compatibility with different systems. If you have devices which support Windows 10, 8, 8.1, 7, or Android, then this is great. It also has impressive compatibility with Mac OS X 10.1, 10.4, 10.5, 10.6, 10.7, and 10.8.

The ASUS router app makes using it so much simpler and easier. Its configuration is done via the ASUS app, which lets you control the activity of the router. You can also use the parental controls while using the ASUS app. You can even restrict the timing of internet usage with this app. This is one of the perks that does not come with all routers, even those with similar speeds.

The interface of this router is quite simple and user-friendly. The software has an easy-to-understand layout, which makes it great for even non-techies.

We have discussed at length the pros that make the ASUS RT-ACRH13 worth your money. Let’s now have a look at problems you might face once you get it.

Admittedly, the USB 3.0 port is the latest port in the market, and it is ten times faster than the USB 2.0. It helps in transferring data much more quickly. It even allows you to transfer large files quickly. But the problem with the ASUS RT-ACRH13 is that it has only one USB port. So, you can connect only one device at a time when you want to transfer data. This limits you to one such task at a time and this sometimes gets frustrating. The other four ports are for Gigabit Ethernet connections only, so they do not help here.

Hard to Set Up

Even if it has an ASUS app to help you to use it, it is hard to set it up initially. This is because the drivers are slightly tricky, which can be a problem if you have not used a router before. In addition to setting up drivers, the initial configuration is hard, as well.

What is the ASUS RT-ACRH13 Best For?

The ASUS RT-ACRH13 caters to the needs of a diverse range of users, as it has great features. The following are some of the things it is best suited for.

The ASUS RT-ACRH13 is best for medium and large homes where you need internet signal in all rooms. You no longer have to stick around in the living room in order to use the internet. With this at your disposal, you can easily stream your favorite sites from the comfort of your bed too. The set of four 5dBi antennas makes sure of this, so there is hardly anything to worry about.

This is amazing for those who work from home or bring some of their work along. It allows you to transfer large files with ease as well, so you can easily send those bulky files. It also provides steady internet, so you can rely on it while you are working.

The router does not connect with over 50 devices like other routers for official buildings do. But this one is definitely great for small office settings. You can connect many wireless and up to four wired devices at the same time. This works fine for desktops and laptops generally present in a small office.

This router is great for gaming and heavy-duty streaming, as well. No matter how advanced your game is, it will help you get the right graphics. There is also almost no lag or buffering, which helps you stay ahead of other gamers.

Now that you know what makes the ASUS RT-ACRH13 so great, why don’t we see what you have to keep in mind while buying a new router?

Since you are getting a router to spread internet signal around, you have to consider internet speed. There are two types of bands in the market which are responsible for internet speed. They are 5GHz and 2.4 GHz, which work to transmit data at different frequencies. Some routers like ASUS RT-ACRH13 have both of these bands and use their combined speeds.

This is something important to keep in mind if you do not want to spend extra dollars on a plug adapter. There are two possible voltages in routers: 110 volts or 220 volts. You have to see which one goes with the electricity supply in your house to avoid any short circuiting. Generally, outlets in the U.S. feature 110 voltage, while many other countries use the 220 voltage.

The size of a router matters a lot, too, as it affects its placement. If it is too big, you cannot hang it on a wall. It will take up too much space on a table, too. And if the router is extra small, it might not offer all the features you want. So, getting a moderately-sized router is the best approach.

Summing it all up, the model is one of the best routers to go for. It has the right size for modern users who want to keep things practical. In addition, it has a shiny black body that looks cool and blends in with the background. Its speed is also great at 867 Mbps, which ensures a great rate of downloading and uploading data.

Moreover, it has high compatibility with both 100-volt and 220-volt electricity formats. The router also has four 5dBi antennas, which help you get an even supply of internet throughout your house. This makes it ideal for gamers as well as home-based workers, so you can invest in it without any reservations.